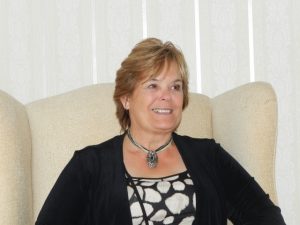 My own life has involved numerous changes, some of which have been wonderful and transforming and some which have taken me to very dark places.

My dad was in the Royal Navy which meant we moved around a lot and I went to many different schools in this country and abroad. At 17 I joined the army (Military Police) partly to get away from home and partly because I was a”tom-boy” and wanted some adventure. Although I enjoyed my time with the Army, it was before equality rights around women’s pay and working conditions, so when I married and had children, I had to leave.

Whilst my 2 children were growing up, I was mostly a “stay at home mum” until they were older and I could return to the world of work.

I loved my work as a Police Officer in the Army and wanted to join the Civilian Police, but at that time the admissions policies did not apply to me. I had left school half way through A levels and regretted not being able to finish them and go to university, so I returned to further education and completed a couple of O levels and then A levels in science subjects with the idea of working in Medical Research. Do you know how poorly paid that work is!

As it was, when I finished my courses an ideal job came up and I joined the Police as a Civilian Scenes of Crime Officer (CSI nowadays). Later on the Police nationally changed their admissions policies and I joined as a Police Officer. It had taken a long time to return to a job I loved and a lot of determination to achieve the level of fitness required. The week before my “Pass out Parade” after 2 years of probation, I was in hospital having an emergency appendectomy and discharged myself early so I did not miss my parade. Needless to say the bosses would not let me march!

After many years of very varied work, with often very sensitive and distressing jobs, but lots of good memories too, I had a car accident whilst on duty, which resulted in me being medically retired! I was not ready for retirement and had not chosen this way forward for life.

Two years later after some dark and depressing times, I picked myself up and thought about what I could do with my life now. I looked at what I was good at and what I did not want to do.

Then I went back to college and re-trained as a Counsellor. I always enjoyed learning at school and found a new thirst for knowledge and have since got the education bug and went on to take 2 degrees and a string of diplomas in various therapeutic topics. These have not only enhanced my knowlegde for my work, but have also forced me to reflect on my life and become very aware of my own defences and what makes me tick!

I wish I had taken Psychology before I had my children- it would have helped me to understand why toddlers have the “terrible 2s and 3s” and why teenagers behave as they do. But as “Winnicott” says, “Good enough Mothering” is all that is necessary to bring up our children so that they become well formed adults. We can make some mistakes.

I have been married 3 times- something I am not proud of, but that is how my life panned out. Current husband and I celebrated our 31st wedding anniversary in 2018, so we must be doing something right! We both had children when we met, so we both know something about the trials of having step-children and extended families. Our children are now in their 40s and we have five grandchildren.

I always used to be a “dog person” until I was introduced to Siamese cats around 35 yrs ago. They are like little dogs but don’t need the exercise! They like to be around humans and talk and will fetch things. There is also something very therapeutic and calming about stroking a pet.